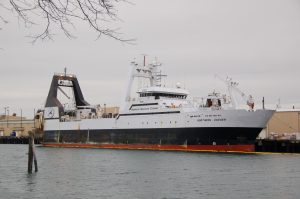 In light of the evolving coronavirus crisis, American Seafoods had worked with health consultants to create a plan to keep their workers safe. This plan initially required a five-day quarantine before heading to sea. However, according to the Center for Disease Control, it can take individuals up to 14 days to show symptoms of COVID-19. Before the F/T American Dynasty went to sea, none of the crew members were symptomatic, but it only took two weeks onboard for almost three-quarters of the crew members to become infected. After push-back, American Seafoods changed its policy on June 5th to include a 14-day quarantine. A 14-day quarantine is in line with state and federal guidelines and other commercial fishing companies.

Because the trawler had already been at sea for a month and there were no signs of the virus, American Seafoods declined the crewmembers’ request, and the vessel continued to Alaska. On June 14th, the F/T Ocean Rover docked in Dutch Harbor, and the 121 crew members were screened and tested, if warranted. Sixteen individuals were tested for COVID-19, but luckily, none tested positive. After American Seafoods cleared the trawler, it offloaded its frozen product and returned to sea.

The coronavirus outbreak on the F/T American Dynasty showed how quickly the virus can spread on commercial fishing vessels. Crew members work long hours in close quarters and a contained environment. Now that the trawlers have moved to Alaska, another coronavirus outbreak on an American Seafoods ship could be disastrous, because the smaller Alaskan fishing ports do not have the same health care resources as Washington State. A COVID-19 outbreak has the potential to quickly overwhelm the health care system in rural Alaska.