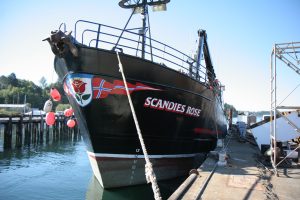 On January 31, 2019 at approximately 10 p.m., the F/V SCANDIES ROSE sank near Sutwik Island, Alaska with seven crew members on board.  According to a news release by the U.S. Coast Guard, two survivors were rescued and five crew members remain missing from the 130-foot crab fishing vessel.  When the Coast Guard arrived at the scene, visibility was almost zero but they were able to see the faint lights of the life raft holding the two rescued crew members.  The search for the missing crew members included a span of 1400-square miles with weather reported at the scene of 60 mph winds.  The Coast Guard used four MH-60 Jayhawk helicopter crews, two HC-130 Hercules airplane crews, and the Coast Guard Cutter Mellon in an attempt to find the missing crew members.  After 20-hours of searching, the U.S. Coast Guard made the difficult decision to suspend the search for the missing crew on January 1, 2020 at 6:08 p.m.

At the time of the incident, our law firm was involved in pending litigation in King County Superior Court against the vessel for alleged unsafe crab pot stacking practices that led to a career-ending crew injury.  The captain of the vessel had recently given a deposition in the crab pot stacking case on December 12, 2019 and some of the other crew members were witnesses in the case.  In his deposition, the captain gave extensive testimony about his crab pot stacking practices.  Our lawyers and expert boarded the F/V SCANDIES ROSE in Seattle on May 18, 2019 as part of the investigation into the case and inspected the vessel and its equipment.  Because the stability of the F/V SCANDIES ROSE in icing conditions may be a substantial issue in the investigation into the sinking, the testimony of the captain and other evidence collected in our case could be important to the investigation and any litigation.  Our sincere condolences go out to the families and friends of the missing crew members.  By all accounts, they were brave men doing a difficult job and they will be deeply missed by all.

Under the Jones Act, the personal representative of the estate of a seaman lost at sea may bring a cause of action for wrongful death for the benefit of (1) a surviving spouse and children; (2) parents; and (3) dependent next of kin.  45 U.S.C. § 59.  Common law spouses may recover, if, looking to applicable state law, the existence of common law marriage is recognized.  The recoverable damages for wrongful death under the Jones Act include damages for loss of financial support, loss of nurture and guidance to minor children, loss of service, and pre-death pain and suffering.  See e.g., Centeno v. Gulf Fleet Crews, Inc., 798 F.2d 138 (5th Cir. 1987).  If you have questions about the remedies available under the Jones Act for wrongful death, feel free to contact our law firm for a free consultation to discuss maritime law remedies under these circumstances.  Because of the complexity of these issues and the unique nature of maritime law, it is important that you consult with an experienced maritime injury law attorney.

The vessel’s emergency locator beacon (EPIRB) was activated at 6:11 a.m. on Saturday, and the U.S. Coast Guard and volunteers searched for nearly three days for the vessel and crew, without success.  The EPIRB can be activated manually, or activates automatically upon hitting sea water.  The Coast Guard received no mayday call from the vessel, which has led to speculation that whatever befell the vessel happened quickly.  Volunteer vessels assisted the Coast Guard search, as well as individuals on ATVs along the shoreline of St. George Island.  There are high cliffs along the shore of St. George, which provided volunteers a vantage point to look out to sea for evidence of the DESTINATION or debris from the vessel.

Search crews reported 30 mph winds, five to eight-foot waves, and air temperature of 20 degrees.  The Bering Sea is known for bad weather this time of year.  In such temperatures, ice can build up on a boat, reducing stability and buoyancy.

END_OF_DOCUMENT_TOKEN_TO_BE_REPLACED

One of the most deadly jobs in America is commercial Dungeness crab fishing, yet according to a new study from Oregon State University (OSU), many non-fatal injuries in the industry largely go unreported.  The study conducted by OSU found the rate of fatal injuries in commercial Dungeness crab fishing to be 65 times higher than the rate for all United States workers; however, the nonfatal injury rate was 3 times lower. For example, from 2002-2014 28 people died while commercially fishing for Dungeness crab, while only 45 injuries were reported. In addition, it was found that the majority of deaths occurred during vessel disasters such as capsizing or sinking. Furthermore, the most common reported injury was fractures; 47 percent of nonfatal injuries occurred on-deck when fishermen were working with gear.  Researchers found the cause of underreporting to be the result of concerns of financial and regulatory repercussions. Barriers to reporting also may play a role in the underreporting of injuries.

The research that OSU has found is part of a project, The Fishermen Led Injury Prevention Program (FLIPP), which is designed to take a new approach to fishing industry injury prevention by working with commercial Dungeness crab fishermen to identify and reduce injury risks.

END_OF_DOCUMENT_TOKEN_TO_BE_REPLACED 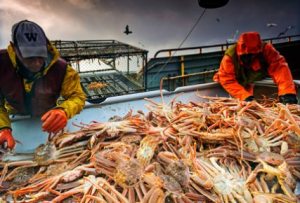 The Bristol Bay red king crab season is scheduled to begin on October 15 and continue through January 15. This year, the allowable catch is up 16% over last year with a total of 9.9 million pounds. Similarly, state fisheries biologists have set the total allowable catch for tanner crab at 8.4 million pounds in the eastern sector and 6.6 million pounds in the western sector, which represents a substantial increase from 2013. Overall, the stocks of red king crab, tanners, and snow crab all showed big increased in mature size classes based on data from annual summer surveys taken by fisheries biologists.

With the start of Alaskan crab season, we are reminded that every year fishermen lose their lives and many suffer serious injuries in vessel accidents. Common examples of injuries include slips and falls on icy and wet decks without adequate non-skid protection or mats, being struck with swinging crab pots, fishermen struck by waves that wash them across the deck or overboard, frostbite, crushing injuries due to getting hands, legs, or feet caught in pinch points or deck equipment, injuries caused by fatigue and long hours operating heavy equipment, parting lines or cables out on deck, injuries while stacking or lashing crab pots out on deck, lifting injuries, injuries from bait choppers, falling cargo, unsafe access to docks, and many other types of incidents. Regardless of the cause of an injury, a vessel owner is responsible under the Jones Act for providing the crew with a reasonably safe place to work. If unsafe work conditions cause an injury, a fisherman can claim damages for the injury beyond payment of maintenance and cure. If you suffer an injury on an crab boat, make certain that you timely fill out an accident report even if you believe at the time that the injury will resolve. Get the names, addresses, email addresses, and telephone number of any witnesses to the incident. Make sure to take photographs, if possible, of the scene of the incident and any equipment that was involved. By taking these steps, you can assist your lawyer in finding the truth about how your injury occurred.

Despite the deaths of 131 commercial fishermen from 2000 to 2009, the regulation of fishing vessel safety is very limited, in part, due to a strong commercial fishing lobby.  According to the National Institute of Occupational Safety and Health (NIOSH), half of these fishermen died from vessel disasters and another 31 percent died from falls overboard.  NIOSH is a leader in promoting the use of life jackets and other safety measures in the fishing industry.  NIOSH has found that only one of the 191 fishermen who died between 2000 and 2012 was wearing a life jacket.  While wearing a life jacket does not guarantee survival, it certainly greatly increases your chances of survival in the event that you fall overboard.

The types of life jackets worn on fishing vessels decks tend to vary based on the fishery.  According to a NIOSH survey, crabbers favored the use of Mustang and Sterns Inflatable Suspenders, while longliners preferred only the Mustang suspenders.  Gillnetters liked the Mustang suspenders, and Regatta Fishermen’s Oilskins with floatation built in.  Deck crews of Trawlers preferred inflatable suspenders, oilskins and a Stearns’ foam vest.  Given the different work requirements of the various fisheries, it is important for vessel owners to share information about what works best and to encourage or mandate the use of life jackets out on deck.

Because of the number of deaths caused by falling overboard, the use of life jackets has become a major focus at NIOSH.  The organization has been pushing employers to have a plan for when fishermen onboard should be wearing a lifejacket.  Standards may vary from vessel to vessel, and could be based on weather, duties, location of the ship, and other factors.  However, NIOSH is pushing all employers to have a plan for the use of life jackets.  In addition to life jackets, NIOSH stresses the use of man overboard alarms, personal locator beacons, and closing water-tight hatches on fishing vessels as important safety precautions that can save lives.

END_OF_DOCUMENT_TOKEN_TO_BE_REPLACED

Fish processors on factory trawlers work long hours under difficult and often dangerous conditions.  Injuries are common and can change your life forever.  In the wake of an injury, it is important that a fish processor understand the important differences between the Jones Act and Alaska state workers’ compensations laws.  If the processor was injured in the territorial waters off Alaska (within three miles) on a factory trawler or processing barge, you have the right to bring a state workers’ compensation claim and may also seek additional compensation under the Jones Act.  If you are injured outside of state territorial waters (more than three miles from shore) on a factory trawler, you are likely covered under the Jones Act and general maritime law.