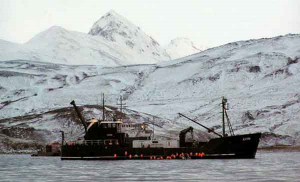 On Friday, December 6, 2016, at 9:38 p.m., the crew of the F/V Exito contacted the U.S. Coast Guard reporting that they were taking on water 14 miles northeast of Dutch Harbor.  Five crew members were aboard when the vessel sank and a nearby vessel, the Afognak Strait, was able to rescue three crew members from the water.  The U.S. Coast Guard responded with the Coast Guard cutter Alex Haley and a Jayhawk helicopter from Air Station Kodiak.  Unfortunately, the other two crew members were not found and remain missing.