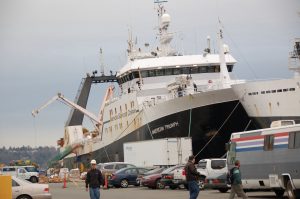 On January 23, Ninth Circuit decided Batterson v. Dutra Grp. which addressed the whether punitive damages are available in an unseaworthiness cause of action. Following last year’s unanimous Washington State Supreme Court decision in Tabingo v. Am. Triumph LLC, 188 Wn.2d 41 (March 9, 2017), a three-judge panel of the Ninth Circiut answered the question in the affirmative, holding that punitive damages may be awarded in unseaworthiness cases to punish conduct which manifests reckless or callous disregard for the rights of others, gross negligence, actual malice, or criminal indifference.

This means that seamen asserting an unseaworthiness cause of action in courts within the Ninth Circuit, and in Washington State Courts, may claim punitive damages. . . . at least for now. The U.S. Supreme Court denied cert in Tabingo, supra, on January 8, but the shipowner in Batterton will almost surely seek Supreme Court review. There is currently a circuit split on this issue, as the Fifth Circuit ruled against the availability of punitive damages in McBride v. Estis Well Serv., L.L.C., 768 F.3d 382 (5th Cir. 2014), cert denied, 135 S. Ct. 2310, 191 L.Ed.2d 978 (2015). It remains to be seen whether the U.S. Supreme Court will weigh in on the issue.